This is the third and final segment of the series entitled “Why Bitcoin?”. In Part 1, I argued that understanding money was central to understanding Bitcoin.

Subsequently in Part 2, I delved into what Bitcoin is, what problem is intends to solve and what makes it a better alternative to the current financial system.

Now in this Part 3, I’ll touch briefly on the investment case for Bitcoin and why everyone should consider having at least a small portion of their wealth stored in Bitcoin.

4 Reasons to Invest in Bitcoin

With a hard cap supply limit of 21 million, and with 90% having already been mined, Bitcoin is among the scarcest assets on Earth. An estimated 4 million is said to be lost or otherwise unrecoverable, increasing its scarcity.

In addition, its supply is perfectly inelastic, meaning increased demand has no impact on the rate at which new bitcoins are minted. In that sense, unlike central banks where a handful of individuals determine the monetary policy, with Bitcoin, its monetary policy is entirely predictable and pre-programmed into the code. Bitcoin’s current inflation rate is 1.78%, and is coded to decline over time. By 2024, it will be 1%.

Post GFC, we found ourselves living in a world characterised by growing levels of debt, low interest rates and negative bond yields. Come March 2020 and the onset of the Covid-19 pandemic, we saw a massive deleveraging event within capital markets, resulting in the collapse of most asset classes.

Predictably, central banks around the world started printing money at unprecedented rates to stimulate economies. As a result, debt skyrocketed, budget deficits soared and in 2021 alone, the money supply increased by 15 – 40% in most developed countries.

These macro conditions leading to record levels of inflation provide a perfect backdrop for inflation-hedge assets. Historically, investors turned to gold to preserve their purchasing power. Today, that solution is Bitcoin.

Reason 3: Bitcoin Has Crossed into Mainstream

In 12 years, Bitcoin has evolved from obscure digital collectible to an institutional asset class. Much of this shift occurred post-March 2020. Since then, we’ve seen an increased levels of adoption from both institutional and retail investors, with recent estimates suggesting that Bitcoin’s user base has doubled over the past 18 months.

Much of this can be attributed to institutional adoption which has provided increased levels of mainstream acceptance and recognition of the asset. Insurance companies, sovereign wealth funds, pension funds, asset managers, hedge fund managers, family offices and corporations have bet big on Bitcoin over the past 18 months.

For these reasons, Bitcoin in 2021 is substantially de-risked, yet still offers investors a compelling asymmetric investment opportunity.

Reason 4: Bitcoin Has Outperformed All Other Asset Classes

The final reason is what gets most people excited, namely that Bitcoin has outperformed all major asset classes over any material period. There are no free lunches in the investment world, so in exchange for extraordinary returns, you need to have the stomach to withstand short-term volatility.

If Bitcoin’s volatility keeps you up at night, you simply need to downsize your position. 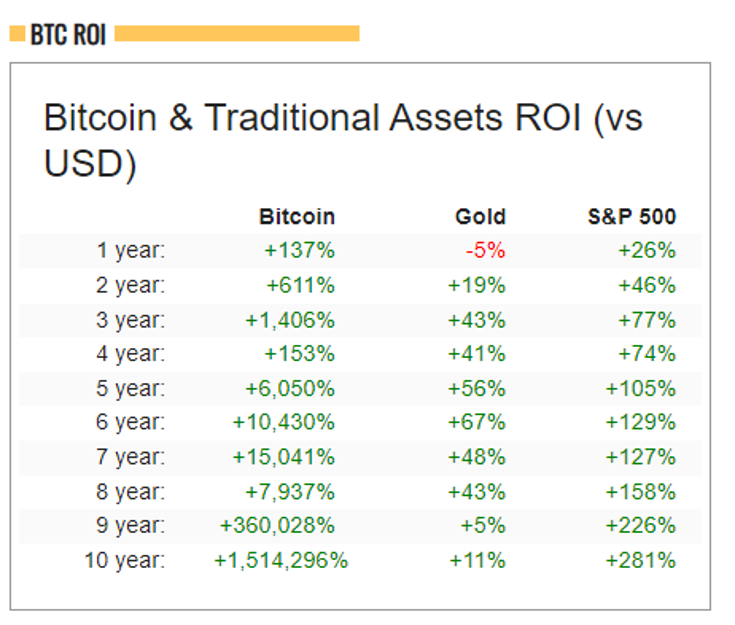 Bitcoin’s investment case is compelling and all investors should at least consider making an allocation to the asset.

Going down the Bitcoin rabbit hole is a rewarding and intellectually satisfying journey with no end. It humbles you and changes you, forcing you to think long-term. It teaches you “proof of work”, that there are no short-cuts to success. It’s an economic, technological, political and philosophical peaceful revolution.

That might not make much sense to you right now, and I don’t blame you. Thousands of hours later and I’ve still got so much work to do. In any event, I’d encourage you to join me further down the rabbit hole.

Some of my favourite pieces:

Dale is a reformed solicitor and Bitcoin writer, editor and consultant known as the Bitcoin Shepherd. He loves to orange pill normies and help people understand, buy and securely store their own bitcoin. You can follow his musings on Twitter.
Buy Bitcoin